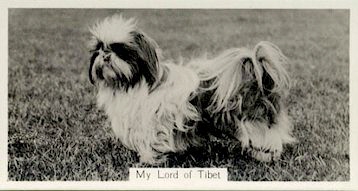 Breed History
The ancestry of the Shih Tzu (meaning “lion”) dates back to at least several centuries B.C., descending from Tibetan origin.
More than 2000 years ago already small dogs (called Fu-Lin) were exported to Tibet from Malta, Turkey, Greece, and Persia. Interbreeding of the Fu-Lin dog with small local Tibetan breeds probably resulted in the Lhasa Apso type (Bhuteer/Buthan terrier). Dogs of this type were in ancient times presented as a ceremonial gift of the Grand Lamas to the Chinese Imperial Court in Peking. The Court interbred these Tibetan dogs with already present other court dogs of Pekingese- (Lho Sze) and Pug type. From China this breed finally came to Western Europe. There are no reports of Shih Tzu being imported directly from Tibet.

Early 1900’s the first Shih Tzu was brought to England. More imports followed, and the breed became well established there. England recognized the breed in 1933. Its popularity subsequently spread to Continental Europe and to North America.

Dutch History
The first Dutch Shih Tzu were imported from the UK in 1962.
In Holland the Shih Tzu is judged in group 9: companion dogs. (In the UK the breed is judged in the utility group. Classified as a Toy breed in the United States, the Shih Tzu is a member of the Non-Sporting Group in Canada).
The Shih Tzu used to be one of the many breeds brought together in the Pekingese- and Toyspaniel Club but in 1990 their own breed club was founded. The club has about 350 members. The number of K.C. registered Shih Tzu is about 3.500-4.000. About 350-400 puppies are registered per year.

Appearance
The Shih Tzu is a sturdy, muscular and long-coated dog with heavy bone. Its weight surprises people. The Shih Tzu coat comes in a wide range of colours and requires a daily 10 to 15 minute brushing to prevent matting. The hair on the head is tied up in a top knot.
They are friendly, playful animals who interact well with adults as well as children. They are truly “people dogs” therefore they should not be kept in kennels away from people. Their small size and friendly demeanour make them the perfect dog for apartment dwellers. Their oriental heritage though is the possession of a good stubborn streak! This can be frustrating when trying to housebreak or train a young Shih Tzu puppy.
Being a small breed, the Shih Tzu has a longer average lifespan than those of larger breeds.